Hopefully, this message will also be read by a Veteran out there who is struggling with the very things that Mikel was, and just maybe, that Veteran will know that they aren’t alone and will get the help they need.

After Mikel was wounded in Iraq on his second Combat tour in 2007, he was sent to Ft. Sam TX to recover. While there, several life-changing events happened, starting with his trouble with addiction. 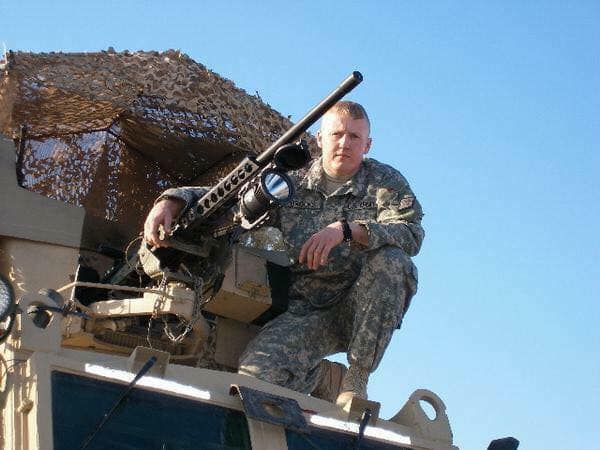 as many Veterans can tell you, the Military and VA had a very “lax” approach to narcotic medication and Mikel was one of the ones who fell into that abyss.

``Thus began my journey into Hell.``

Mikel was also diagnosed with a severe TBI (traumatic brain injury) from all of the bomb blasts he lived through during his active duty. His brain injury left him with a 45 percent disability rating for TBI alone, which is uncommon. While there Mikel also began having seizures stemming from his TBI, in addition to his PTSD, torn ligaments in his right shoulder, a blown left eardrum, an 8cm rip in his diaphragm, and the shrapnel in his left hip. All of these things led to him being Medically Retired from the Military in 2009.

At one point Mikel recalled, “I remember sitting in my room staring at 16 prescription bottles that included 90 20mg Oxycontin, and 60 1mg Xanax, and wondering how all of that was good for me.”

Mikel goes on to describe his experience. “After I retired I began receiving all of my medications, including my narcotics, in the mail at home. That was fine for a while, but you see opiates are extremely addictive and are responsible for thousands of overdose deaths every year. Unbeknownst to me while I was still on active duty I had become physically addicted. I also began struggling to cope with adjustment disorder, my TBI and PTSD, but probably what was more profound to me was that I felt like they had taken my identity when they took that Uniform. Add to that the fact that with my seizures I was unable to work. In fact, I am deemed individually unemployable by our Government, and I began to abuse my medication.”

Luckily Mikel went to rehab at the VA and got the help he needed to get off of the pain meds, but a couple of years later still found himself back in a place that a lot of my fellow Veterans have found themselves.

He was young but couldn’t work and now, didn’t trust the VA because of bad experiences he had prior. “I felt like I had no purpose, no use or mission in this life, and these things are vital to a Soldier,” Mikel says.

Finally, as his PTSD and TBI caused him to isolate himself and as his drug abuse continued to escalate in 2013 Mikel began using meth. The following is an excerpt written personally by Mikel Brooks retelling his experience of the events that followed.

Understand as I write this that these next few memories may be difficult to read, but reliving them is agony.

In 2013 I became an intravenous methamphetamine addict. Over the course of the next several years, I managed to destroy every friendship, and burn every bridge I had ever made. I was so ashamed of myself that nothing you could ever think of me will come close to how badly I viewed myself. I was a Purple Heart and Valor Decorated, washed up, homeless, Veteran junkie. I had become the one thing I said I never would be, I was a statistic.

I was involuntarily admitted into the VA during this time by my family, and on two occasions I unsuccessfully attempted to take my own life, the first time I woke up three days later in Ft. Roots VA, the second time I attempted to overdose in an abandoned house in a secluded location, and as I laid on that dirty floor in the dark with my life in ruins around me, waiting to die, I thought about my fire team leader who had taken his life, and my driver from my second tour who was in prison, and how wrong all of it was… and for some reason, I suddenly didn’t want to die,

but it was too late.

As I began to fade out I remember begging my God to let me live, and I swore that if someone busted through that door right then and saved me that I would do everything I could to make up for my mistakes.

But no one came.

23 hours later I woke up alone on that dirty floor.

A week later I met my dear friend and founding Board Member Larry Johnson, 3 months after that We Are The 22 was founded, and I’ve never looked back.

This is why my Organization is dedicated not only to Suicide Prevention but to what I felt was the missing link, direct Suicide Intervention.

So, matter what happens, or what anyone thinks, my teams will continue to wake up every day and ensure that if there is ever another Veteran praying for someone to walk through a door and save them from Suicide,